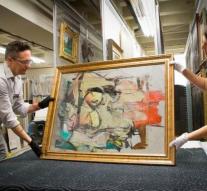 new york - In the US New Mexico a closed cloth of the Dutch painter Willem de Kooning has emerged.

That reports US media. The work called 'Woman-Ocher' was stolen from the University Museum in Arizona in 1985.

An owner of a furniture and antique shop had gotten the job after buying a part of a property. He had no idea that it was a De Kooning to ask visitors of his shop questions. Through the internet he found information about theft and compared the painting with pictures on the internet. Then he immediately decided that he would return the job. He contacted the museum. There was the list where the canvas was cut out of the theft. It turned out to be accurate.

According to the New York Times, a press conference will be held on Monday about the finding of De Kooning's painting.