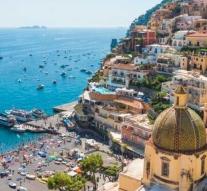 rome - Criminal art dealers have luxury villas for tourists on the Amalfi Coast, south of Naples, decorated with sometimes ancient stolen paintings. The Italian Marechaussee has seized a total of 37 works of great cultural-historical value.

This includes a work attributed to the Bolognese baroque painter Guido Reni from the seventeenth century and five altarpieces from the period 1600-1800. According to the newspaper Corriere della Sera, these were stolen from churches in the Aquila region, which was hit by a severe earthquake in 2009.

A thieves 'gang has' collected 'the art treasures in twenty years' time. An investigation, which began last September, has shown that the collection was exhibited in expensive holiday homes. The police said on Tuesday that three people have been indicted for their illegal practices, but they have not yet been arrested.