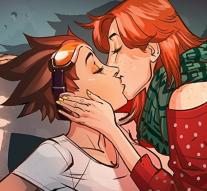 Reading a new webcomic around the popular shooting game Overwatch is not in Russia. The strip shows that one of the characters in the game is a lesbian and in Russia it is not allowed to publish 'homosexual propaganda'.

The strip revolves around the holidays and how the characters in the game they spend. Tracer, a British lady turns out to spend time with her female partner. It is the first time that developer Blizzard Entertainment makes clear that she is in a lesbian relationship.

Not only in Russia there is turmoil on the disclosure. There also seem a lot to be homophobic fans who are not happy. Several players questions on the official forum of the game their money back.