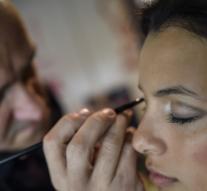 rabat - Moroccan TV program Sabahiyat showed how a woman's physical effects of domestic violence using makeup can stash. The studio was a model in which counterfeit blue and swollen spots were eliminated in the face. The channel 2M was flooded immediately after the broadcast with furious reactions.

The model had supposedly knocks in her face. The consequences were a make-upspecialiste skillfully obscured. The commentary there was, 'We hope that these beauty tips will further help through everyday life. '

Within a short time, according to The Guardian, there was at the station a petition on the mat. Hundreds of women demanded an apology from them and sanctions against 2M. The station responded by removing a video about the make-up treatment of the website. Facebook spread the transmitter a statement the program as 'completely inappropriate' was qualified. 'The incorrect assessment of the seriousness of violence against women.'