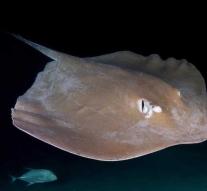 hobart - An unsuspecting swimmer off the coast of Tasmania was stabbed to death by a stingray. The man was struck by the tentacle of the animal in his abdomen.

The man swam alone off the coast when the attack took place. He was taken out of the water by friends, but CPR could not help. The local police speak of a 'tragic incident'. The beach remained open after the dramatic accident.

The fatal drama is reminiscent of the death of 'Crocodile Hunter' Steve Irwin. The TV personality, known for his nature series, died in 2006 when a stingray hit him in the heart. Irwin made underwater recordings at that time.