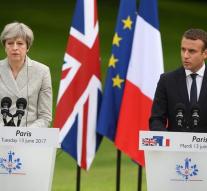 paris - As long as the negotiations on brexit have not been completed, the door of the European Union is open to the British. However, it is difficult to go back the road once the negotiations have begun.

That told French President Emmanuel Macron on Tuesday after a work dinner he had in the presidential palace in Paris with British Prime Minister Theresa May. He expressed the hope that negotiations will start as soon as possible.

May, who was working in London on Tuesday to form a coalition with the Northern Irish Democratic Unionist Party, said she had confirmed to her host that the brexit talks actually begin this week. The British are on schedule with their preparations for the negotiations, she said.