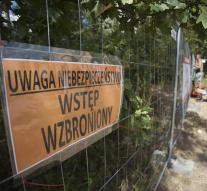 warsaw - Amateur historians have look after a week still found nothing in the Polish Walbrzych. Yet they want their theory that an underground train full of Nazi-looted valuables is not released yet.,, Hope dies last, 'said a spokeswoman for the treasure hunters Wednesday.

Piotr Copper and Andreas Richter think buried Nazi treasure train at the end of World War II in a tunnel system in Lower Silesia. They wanted the valuables, including Jewish treasures and panels from a Russian palace, hide from the advancing Red Army. If that is true, they did a good job, because the train has since never saw anything. Experts were investigating last year in the area, saw a radar or a structure that looked like a tunnel at about 9 meters deep, but more concrete than that it is not proof.

Copper, Richter and their team of about 35 diggers have now ordered an auger to search further. In a few days they hope to resume work.