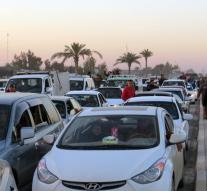 baghdad - In the Iraqi city of Ramadi, according to the Government of Iraq has largely recaptured Islamic state, still sit a few hundred fighters of the terrorist organization.

In the central part there are about four hundred IS fighters and to the east is also another hundred. That told an American intelligence officer of the coalition forces Wednesday to reporters in Baghdad.

According to the refugee agency of the United Nations, it is still too early to let displaced persons return again. This is partly because the city is still riddled with booby traps and landmines IS placed.

The provincial capital Ramadi had prior IS there in the spring invaded some 400 000 inhabitants. A few days ago, the Iraqi government announced the victory in the city which was destroyed to a great extent.