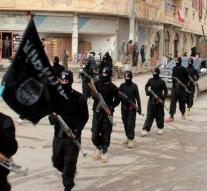 washington - In the Syrian city of Raqqa, more than 2,000 warriors of Islamic State (IS) are expected to fight for the continued existence of their organization. That said the US Special Envoy for the Coalition Fighting against IS Friday.

'IS fighting in Raqqa for each block and for survival,' said Brett McGurk. The US-supported Syrian Democratic Armed Forces started an offensive in June to rebuild the city. The IS-bolwerk has been surrounded for some time now.