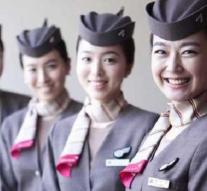 seoul - A model has received € 84,000 in compensation from airline Asiana Airlines after one of the stewardesses accidentally spilled red-hot noodle soup on its intimate parts during a flight. This happened in 2015 and resulted in permanent damage.

The woman, named Chang, took third-degree burns to the accident. 'I have undergone several skin transplants, but everything is far from being ok', says the model who wants to remain anonymous to The Straits Times.

'The relationship with my husband suffers considerably. And if I do get pregnant, there will be additional risks involved. '

Chang blames the airline that there were not enough tools on board to treat her burns. She had to do it with a bag of ice cream, an ointment and painkillers.

Asiana Airlines, however, has a different story. Chang would have dropped the tray himself. 'There was also a doctor on the plane. We have followed his instructions ', according to the airline during the lawsuit.

Chang demanded 2 million won (1530 euros) compensation. According to the judge in Seoul, that was not enough. Asiana Airlines and the stewardess must now pay 84,000 euros together.