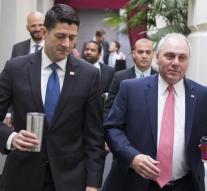 alexandria - US parliamentarian Steve Scalise is in critical condition at the hospital. The Republican was shot down in a baseball field on Wednesday in the town of Alexandria near Washington. Earlier, President Trump stated on television that Scalise made it right.

The hospital provided no further information. Scalise was hit by the shooter, 66-year-old James Hodgkinson, in his hip, said the police.

The 51-year-old politician was not the only victim of the shooting. Four others were also injured by bullets. The so-called Capitol Police, in charge of the security of the American parliamentarians, shot the attacker. He soon succumbed to his injuries.