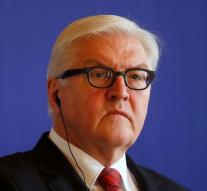 - US presidential candidate Donald Trump has been criticized sharply again. German Foreign Minister Frank-Walter Steinmeier (SPD) said,, to be really scared '' for the developments in the world at an election victory of billionaire Donald Trump. That said the spokeswoman for the minister Wednesday in Berlin.