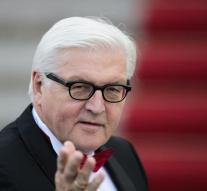 - Foreign Minister Frank-Walter Steinmeier needs if it is to the SPD and the CDU will be the new president of Germany. The two governing parties have agreed on the candidacy of the sixty SPD'er. He is the candidate of the 'grand coalition'.

Chancellor Angela Merkel was initially against Steinmeier as candidate but when her party not came up with its own candidate, she went at the urging of CSU leader Horst Seehofer still tack. Merkel and Seehofer have Monday the sister parties CDU and CSU- forming a faction in the Bundestag- informed.

Germany elects a new president on 12 February. Sitting president Joachim Gauck has indicated that aspire to a new term. The President of Germany is elected by the so-called Bundesversammlung formed by all members of the Bundestag supplemented by as many delegates who are elected by the states.