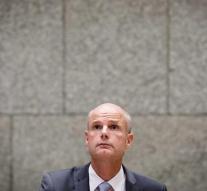 the hague - It is not punishable to stay in areas where terrorist groups are the service. This is apparent from a bill sent to the Lower House on Tuesday by Minister Stef Blok (Security and Justice).

The punishment has been removed because it is no longer necessary. Earlier it was thought that punishment of pure could be a useful stay. The name has shown that in the prosecution of people who find that they have been in Syria for example, it is usually Blok's best to prove that they have participated in a terrorist organization.