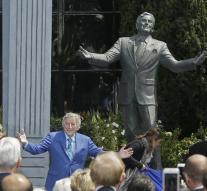 - With his 90 years, the celebrated American singer Tony Bennett ('Because of you') in the US San Francisco Friday night (local time) unveiled a life-size statue of himself. The bronze statue is a leaving present for his 90th birthday on 3 August.

In San Francisco, the New York native has a close connection. Here he sang for the first time in 1961 his famous signature tune 'I left my heart in San Francisco, 'which earned him his first Grammy Award one year later.

Visibly moved revealed the singer cheering fans his bronze likeness. He was a guest at the baseball stadium of the San Francisco Giants, where more than 40 000 spectators spent sing a birthday serenade.