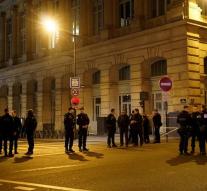 paris - The Paris train station Gare du Nord was evacuated by the French police on Monday night on Monday. Agents would be looking for 'three dangerous men', according to the French newspaper Le Parisien.

From 23.00 on Monday evening the station was not accessible. Present travelers had to leave the station or wait on the train. Several travelers reported on Twitter that they could not get on.

According to the newspaper, the police had directed her arrows on a TGV, with 211 people aboard. Earlier in the week another country would have already warned the three men.

Around two o'clock the French police informed Twitter that the checks were completed at the station. 'The situation will slowly become normal again from now on. 'More details have not been given yet.