Home / World / States US to court on illegal immigrants 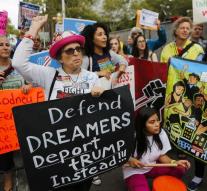 washington - Fifteen US states have gone to court to stop the expulsion of immigrants who have illegally entered the country as a child. In the charge, the states state that the decision by President Donald Trump to expel is a consequence of his previous commitment 'to punish and reduce people with Mexican roots.'

Earlier this week, Trump announced that he wanted to abolish the so-called DACA program. The scheme was set under the previous President Barack Obama in 2012 and aimed at protecting nearly 800,000 people who entered the US as a child when the parents crossed the border illegally in the past.

About three quarters of the people belonging to that group are of Mexican origin. Trump previously put some of the Mexicans down as 'bad people and rapists. '