Home / World / State of emergency in central Italy after quake 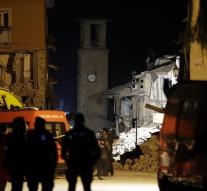 rome - The Italian government has declared a state of emergency in the regions most affected by the earthquake on Wednesday in central Italy. It reports the BBC Friday. Premier Matteo Renzi said 50 million for the reconstruction of the affected areas. He also raised taxes for residents and he came up with an initiative to create more earthquake resistant Italian houses.

In the Italian press after the quake sounded critical about the quality of construction in areas with a high risk of earthquakes. According to Renzi, however,, absurd 'to think that Italy can rely completely earthquake-resistant houses. Historic Italian towns and cities do not need to maintain specific building codes to prevent collapse in earthquakes. These rules are also not always used in new construction.

So far certainly recovered 250 dead; more than 350 people were injured during the earthquake. Some 5,000 rescue workers are still busy searching through the rubble for victims and possible survivors. The work of the teams is hampered by the hundreds of aftershocks that still affect the area. Yet so far, 215 people taken alive from under the rubble, reported the Italian news agency ANSA on Thursday.


In Amatrice, with 200 killed one of the worst affected villages, the police have arrested a man on suspicion of attempted burglary and looting of a house.