Home / World / 'State of emergency due to wildfires Greek island' 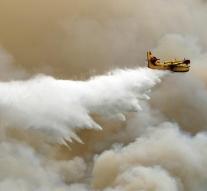 - "Two villages and two monasteries in the northern Greek island of Thassos are evacuated due to major forest fires. A firefighter was injured in fighting the blaze, reports newspaper Ekathimerini. How he's at, exactly, is unknown. The authorities have declared a state of emergency."

"The residents of Kazaviti and Prino entrusted to find a safe haven. Several houses were damaged in the villages, but which seems to have freed all residents with fright. Two monasteries on the island were evacuated Saturday."