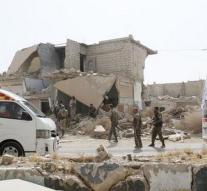 - The evacuation of people from daraya, a suburb of the Syrian capital Damascus, began Friday. The first civilians and combatants of the opposition have left the beleaguered district by bus, according to eyewitnesses and the Syrian state.

The rebels and the Syrian regime reached Thursday an agreement on the evacuation of daraya. The city was already since 2012 siege by the Syrian army, leaving came only essential food.