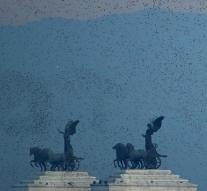 rome - Rome is plagued by millions of starlings that have chosen the Eternal City to rest some pleasure. As long as they are beautiful formations in the sky over the Italian capital plow, there is nothing wrong. Only when they take part in large numbers in the trees drop their needs, raining complaints by the Romans.

Sidewalks, jackets, parked cars, nothing escapes the excrements dropping the birds. The amount of shit even creates traffic problems. When it rained Thursday as the streets were along the Tiber, where the starlings like to be, very slippery. The streets along the river had even briefly dropped to all traffic. This caused a traffic chaos in the city where countless people were busy doing their Christmas shopping.

The town council is trying to combat the scourge. The city used loudspeakers to resound to the sound of birds of prey. But the starlings, which warm the city is a wonderful stay, pulling himself up to now nowhere to anything.