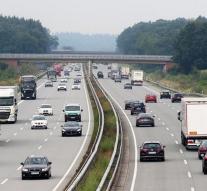 frankfurt an eer oder - The German police intercepted a truck with 51 people in the cargo area on the A12 motorway near the border with Poland. Among the occupants were seventeen children, a federal police spokeswoman said on Saturday.

Whether they are refugees and what nationality they have is not yet clear. According to the spokesman, the people were seated and loaded.

The police forced the 46-year-old driver to stop his truck around 02:00 in the night of Friday on Saturday on the highway between Müllrose and Berlin. The Turkish driver is currently on suspicion of smuggling of human beings. According to a spokesman, the occupants are caught in a police station in Frankfurt an der Oder. As far as is known, no one was injured.

The length of time the truck was on its way is still unclear. Due to the proximity of the Polish border it is clear that the carriage from Poland came to Germany, said the spokesman.