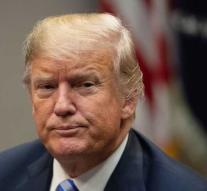 washington - A senior White House official said through an anonymous letter in The New York Times that several of his employees under President Donald Trump are actively opposing him from the inside to protect the United States from his worst impulses.

According to the writer of the letter, there were voices within the US government to drop off Trump, but it was decided not to continue the deposition out of fear of a constitutional crisis. The person also writes that Trump is 'too unstable' and 'unsuitable' to lead the country.

The newspaper says it has decided to publish because the identity of the anonymous letter writer is known to the newspaper.

President Trump reacted furiously to the letter with a tweet of a word in capital letters: 'TIRED?'. In a following message he wrote: 'If the Times knows the person behind the letter, they must indicate it in the interest of national security. '