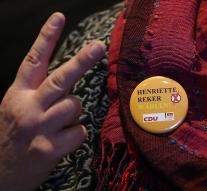 cologne - The German politician stabbed Henriette Reker won Sunday by an absolute majority of the mayoral elections in the German city of Cologne. Reker received 52.7 percent of the vote.

The 58 year-old politician was Saturday attacked and seriously injured.

She served as an independent candidate participating in the mayoral elections.

He would not agree with the refugee policy in Germany.