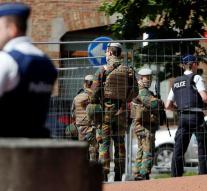 - The two policewomen who early this month were stabbed in Charleroi were allowed to leave the hospital. Reported that the French-speaking channel Bel-RTL Wednesday.

A 33-year-old Algerian crossed the two women on August 6 with a machete neerbij the police station in the Walloon place where they were seriously injured. A third policeman shot the perpetrator dead.

One of the policewomen has a scar on her face and often have to go under the knife. The other victim has surgery on her jaw.