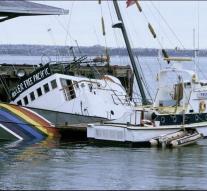 auckland - For years, she was trackless, but 32 years after the bombing that brought the Rainbow Warrior to sink, French and New Zealand media found the French spy Christine Cabon.

She was infiltrated at Greenpeace at that time. Excuses does not want to make them, but says that all soldiers sometimes 'are in situations they would not have wanted. '

Cabon acted as environmentalist Frederique Bonlieu. On board the Rainbow Warrior, she played crucial information to her colleagues from the French secret service who estimated the attack. On July 10, 1985, two bombs sank the flagship in Auckland, New Zealand. The Dutch photographer of Portuguese origin, Fernando Pereira, came to life.

Cabon flew a few weeks before the attack to Israel. She is currently living in a village in southern France.

The Rainbow Warrior was used to protest against French nuclear tests on the atol Mururoa. Two agents who confirmed the mines to the ship have been in favor of this.

Cabon was 33 years old when the attack took place. 'For the New Zealand government and its people... It's an exceptional historical event, 'said the 66-year-old spy now.

She speaks of a 'trauma' for New Zealand that 'a friendly country attacked them. 'Cabon tells her she did her job and did not want to apologize. 'There may be friends I could send a message to, people I met in New Zealand, but not to the outside world. '