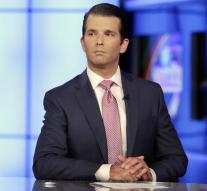 new york - At the controversial meeting between Donald Trump Jr. And a Russian advocate last year there was also a Russian American who worked for the KGB at the time of the USSR. The man is now lobbyist, but according to the American NBC News, he is still working for the Russian secret service.

The lawyer Natalja Veselnitskaja confirms to NBC that she was accompanied by at least one person but did not want to give her identity. NBC also does not mention the name of American Rus by name. The news sender has contacted him and denies the allegations.

NBC has tried to retrieve from Trump Jr.'s lawyer., But despite repeated requests, the counselor did not respond.

The meeting, in addition to Trump Jr. Also, his brother-in-law, Jared Kushner and then Campaign boss Paul Manafort, had caused a lot of shame in the US. In advance, it was announced that information about Hillary Clinton would be presented from the Russian government. Trump Jr. Did not look like an obstacle, as evidenced by an email he himself released.