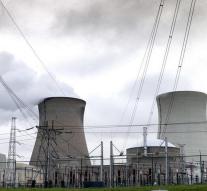 brussels - It was known decades ago that hair cracks were part of the nuclear power plants in the Belgian cities Tihange and Doel. These were noted during the construction phase of the first reactors in the seventies. The power companies knew that, writes Der Spiegel on Friday.

This is evidenced by minutes of meetings and analyzes by Belgian nuclear supervisor FANC, held by German politician Sylvia Kotting-Uhl of the Greens. The German magazine writes on its site that in April 1975 it was found that something was wrong with the pressure regulators. In the used steel were tiny tears. The material should have been rejected.

Tihange, at Hoei in the province of Liège, and Doel, between Antwerp and the Dutch border, are faced with problems that make it necessary to turn off reactors. Environmental activists and distressed citizens have long been demanding closure of the power stations.