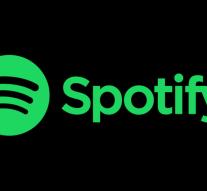 - Spotify has removed the music of a number of extreme right-wing artists on Wednesday. According to the streaming service, they violate the law because their lyrics hate sowing and are racist, so Spotify knows Billboard.

'Spotify does not tolerate illegal music that hates or raises violence because of skin color, faith, sexuality or whatever,' said a spokesman for the company. The removed artists are listed as defenders of the so-called white power and white supremacy movements, which regard the white race as superior on earth.

After the violent riots in American Charlottesville between fans of these movements and protesters, a lot of fuss has arisen in the US. President Trump received criticism from various politicians and celebrities because he did not firmly remove the ultranationalist groups. Also, a series of board chairmen of major American companies such as 3M, Campbell Soup and Merck came from a Trump Advisory Board.

In addition to Spotify, previous hosting company GoDaddy and Google already took action against neonazist websites, such as Daily Stormer.