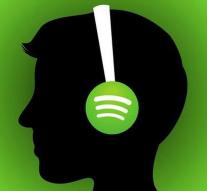 wooden - Spotify is the most popular music app in the Netherlands. The streaming service is on 3.7 million smartphones. Shazam is second with 2.7 million users, iTunes third with 1.8 million users. Telecompaper reports that Thursday based on its own research.

The survey also shows that Spotify is more popular among men than among women. More than half of teens have the app, versus one in eight elderly.