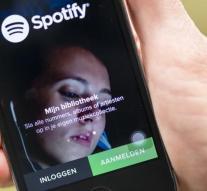 stockholm - Spotify makes it possible to compile playlists in chat groups. Via the messenger service of Facebook, Messenger, friend groups can add songs to each others lists.

To create a so-called Group Playlist, an extension of Spotify is required. According to the Swedish company, members of a chat group need not be Spotify subscriber to add songs.

Facebook announced in April that it introduced features of music services in Messenger. In addition to Spotify, Apple Music also works on chat service features.