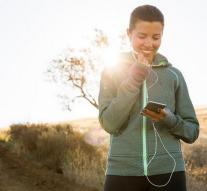 - Many sports apps do too little for the health of athletes. They just increase the risk of injuries. Many recreational runners stop because of physical problems or a lack of motivation. Most running apps that are on the market do little to prevent it.

That concludes sport professor Steven Fox in his inaugural address at the Eindhoven University of Technology he pronounce Friday.

Research by Fox and his colleagues found that one third of recreational runners ever gets injured. More than 80 percent of the runners said that injuries are one of the main reasons to stop anyway with the hobby. Also, runners often fall ahead of a match. Fox argues that smartphone apps and sports watches can play a significant role.

Virtually all running apps approach the recreational runners as a homogeneous group and not as individuals, know Vos. ' This may even result dropout rate among athletes, 'he says. The apps are focused on performance and not on health.

Sport professor will join the TU / e engaged in research into the possibilities of using technology to encourage exercise and sports. Fox and his colleagues have developed an intelligent sportapp with a personalized approach to the runner. The app includes a training program which should avoid overloading and injuries.