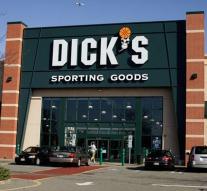 - Dick's Sporting Goods, one of the largest US sports brands, lost 20% of its stock market value on Tuesday.

Investors responded to its quarterly results. They fear that its expansion plans with stores with big discounts for sportswear can not cope with online vendor sales, analysts conclude in the fall of the share.

Dick's is a big name in hunting and fishingwear, golf outfits and special footwear in addition to standard sportswear. His turnover last year amounted to almost $ 8 billion in 14,600 employees. There was a market value of $ 3.2 billion on Tuesday.

Its quarterly figures remained unexpected on Tuesday, which led directly to a sales wave of investors on the stock market after the defeatists in the entire fashion sector.

The company reported with aggressive marketing efforts to protect its market this fall. According to investors, this is at the expense of the margin.