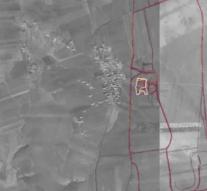 amsterdam - Via the globally popular running and cycling app Strava, users can share their locations, but an interactive map of the app suddenly endangers the safety of American soldiers and other military personnel. The 'Global Heatmap' shows locations of military bases in conflict areas such as Syria and Iraq and this was discovered by a student.

And not only that, the routes of the training tours were also shown in detail. The Global Heatmap is intended as a nice extra from Strava, but according to The Washington Post it has accidentally shared very sensitive information.

Since Strava works on the basis of GPS and satellite technology, the locations and movements can be mapped very easily. This data is then collected by Global Heatmap and in areas where there has been a lot of action, it then illuminates. It is not a 'live' card, because the collected data is from 2015 to September 2017.