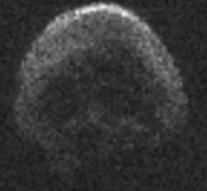 arecibo - The colossal space rock " Spooky " that Saturday ' narrowly ' skims past our planet at a speed of 125,000 kilometers per hour does its name proud. The asteroid looks like a skull.

Astronomers follow the boulder at the base, including at Arecibo radio telescope in Puerto Rico that made these images. The scientists have now also learned that Spooky is greater than expected, ie 600 meters in diameter.

The asteroid was discovered two weeks ago. If it had been on a collision course, this would have been too late to take action, was the somewhat disturbing comments Paul Chodas, head of NASA's "Near-Earth Object office".

Spooky gets its name from its sudden appearance and the fact that he passes on Halloween our planet at a distance of 483 000 kilometers. On intergalactic scale negligible distance. The piece of space debris is considerably larger than the asteroid that hit in Chelyabinsk in Siberia in 2013 and where 1200 people were injured. It had a diameter of up to 17 meters. When the rock would hit the earth, this would result in serious damage.