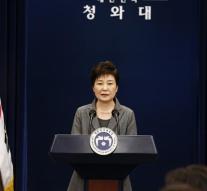 The departure of the parliamentarians has Saenuri only 99 seats. The opposition Democratic Party has 121 seats.

A majority of parliament voted on December 9 to start an impeachment against the president. She is accused of conflict of interest and collusion with a girlfriend. They would put pressure on large companies to donate substantial amounts of private foundations.

Park has apologized but refused to resign.