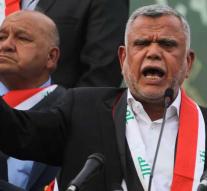 baghdad - The nationalist cleric Moqtada al-Sadr, whose political bloc surprisingly won the parliamentary elections in Iraq, has reached agreement on cooperation with militia leader Hadi al-Amiri. That was announced on Tuesday in the Shia holy city of Najaf. This agreement is a first step towards the formation of a government coalition, although both leaders also keep the door open to other partners.

Sadr, who can not become a prime minister himself because he was not on the electoral list, must have nothing from the United States and does not want any Iranian interference. The alliance of Amiri, who enjoys Iran's support, became the second largest in the ballot box and remained the party of the incumbent prime minister Haider al-Abadi.

The reports Abadi complained about serious irregularities during the elections. However, a recount has become meaningless because a warehouse with ballot papers that was handed in on May 12 went up in flames. The fire seems lit. Abadi said he would not want a new election on Tuesday. According to him, only the Supreme Court can decide to do so.