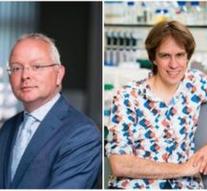 The three are thus rewarded for groundbreaking research. The winners can spend a total of 2.5 million euros on new scientific research. With the premium, the NWO wants to stimulate top research in the Netherlands.

The Spinozapremie is paid annually to researchers working in the Netherlands who are among the best in their field of international standards.