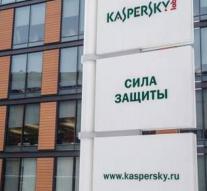 According to The New York Times, Russian secret services would have sneaked in with their American colleagues in recent years. That would have happened through the widely used anti-virus software from the Russian company Kaspersky. That security was until recently also on the computers of several dozens of US government agencies.

Kaspersky scans all files in order to protect its users' computers. Russian spies would have slipped through. The New York Times calls Kaspersky systems 'a kind of Google for sensitive information. 'Whether Kaspersky was aware of that is not clear.

Without the Russians knowing, Israeli spies would have broken into Kaspersky. There they saw what the spies did. By 2014 they would have warned the Americans.