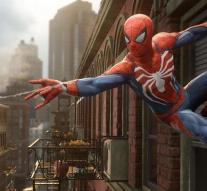 los angeles - Sony has brought many games to Los Angeles; The one more beautiful than the other. But it's the web spider Spider-Man who makes the most impression. It could be the best, film / comic based game of all time.

Sony's press conference was beautiful, artistic even- certainly the opening of music, light and other effects- but also a bit distant. Hardly any speakers, just the American PlayStation boss Shawn Laden who recorded some standard welcome words. The games of PlayStation are happy for themselves, just like the latest sales: currently more than 60.4 million PlayStation 4 consoles have been sold worldwide.

The big claw was undeniably Spider-Man. The sympathetic superhero and his city of New York looked so beautiful and the action looked like that of the white canvas. With Spidey's web wires, you can master enemies in dozens of ways, but just wind up a downhill helicopter in a spinning net. The gameplay looks no less than spectacular and has the potential to seduce even players who are not so much involved with comics and superheroes. Unfortunately, Spider-Man does not appear until 2018.

Horizon: Zero Dawn remains the momentum, especially now later this year DLC will appear for the very successful title of the Amsterdam Guerrilla Games. In The Frozen Wilds, Aloy travels to a new icy landscape full of snow and again giant robots to be chased. Uncharted 4 may be Nathan Drake's last adventure, Uncharted Uncharted: The Lost Legacy takes over the torch with two women in the lead: Treasure Hunter Chloe Frazer and Ranger Nadine Ross. Both played a major role in former Uncharted games, now they are hunting for hidden relics. Very cool to see two of these powerful characters together in such an action game that is usually dominated by male raw coworkers.

Many big, narrative blockbusters have Sony too, but they all will not be released until 2018. God of War puts hotheart Kratos in Norwegian mythology with his son under his guard, which creates a completely new dynamic. Still Kratos laughs loosely, this time with a huge ax, but there is more room for dialogue and speculation. In Days Gone you play biker Deacon who, as a bounty hunter, tries to keep himself in a The Walking Dead-boxed world of hungry zombies. The game reminds us very much of The Last of Us. Personally I'm charmed by Detroit: Become Human. This game comes from the developer behind Heavy Rain and Beyond Two Souls; A kind of interactive film, and that promises to be this game too. Again or not fatal choices in Detroit are central. Androids used as slaves for humanity unleash a revolution with all its consequences. As a player, you're in the middle as you drive three different Android characters. Westworld anyone?

Fortunately, Sony has not forgotten her Virtual Reality headset. Seven titles are revealed- Superhot VR, Star Child, Final Fantasy XV: Monster of the Deep, Bravo Team, The Inpatient, Moss, Skyrim VR- featuring a fun mix of horror, shooting, action, adventure and RPG. Moss is our favorite because of the keen mouse in the main role and the fairytale-like atmosphere.

Where VR is still a relative niche for PlayStation 4, Sony is attempting to broaden its target audience with low-threshold entertainment. With PlayLink you want to even hook non-gamers. The idea is that multiple players simultaneously play a game with the smartphone as a control device. Think of quizzes, partygames or a movie thriller like Hidden Agenda. In this, players follow a public prosecutor, an agent and a serial killer and determine the group how the story unfolds. Meanwhile everyone has their own agenda, a bit like Who's The Mol. Very nice and the different PlayLink games have a sharp price tag of 19.99 euros. Other PlayLink games include That's You, Frantics, SingStar Celebration and Knowledge is Power.