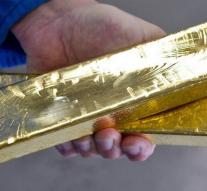 lyon - Four men on Monday near Lyon rob a gold shipment. It is about 70 kilograms of gold looted, worth 2.5 million euros. Police have opened a manhunt.

The robbery happened just off the A6 motorway. The two employees of the transpotbedrijf were trapped in their car after the thieves collected the gold. That French media reported. Then the men put the van on fire. Rushed agents could liberate the trapped men from the vehicle in time. They were unharmed.