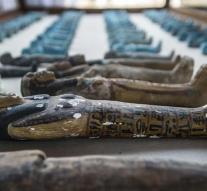 luxor - Archaeologists have revealed a special graftombe at the city of Luxor in Egypt. It's about a goldsmith's tomb that would be over 3500 years old and originates from the eighteenth dynasty of ancient Egypt.

In space, the archaeologists, besides sarcophagens and mummies, found jewelry, masks and an image, probably from the goldsmith and his wife. The grave find is the last in a row this year. Previously, scientists discovered eight mummies in a graveyard room at Luxor and a big picture in the bottom of a poor neighborhood in Cairo.

The Egyptian government hopes that the findings will be a new impetus for tourism to the country.