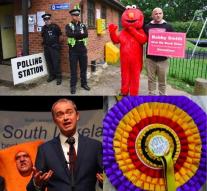 london - A fish stick, Elmo and Lord Buckethead were three of the special candidates who had voted for the British House of Commons on Thursday. Lord Buckethead appeared with a kind of tube over his head and a shining cape on stage next to Prime Minister Theresa May, who managed to retain the constituency of Maidenhead.

The strangest candidates traditionally represent the Monster Raving Loony party. On the same stage in Maidenhead there was also Elmo, a figure from Sesamstraat.

The leader of Liberal Democrats, Tim Farron, was flanked in his constituency by a life-sized fish stick, showing only the face of the candidate.