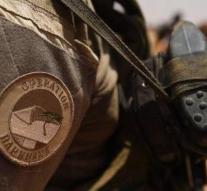 bamako - Five West African countries of the so-called G5-Sahel set up an army unit to fight terrorist operations operating from the Sahara. They decided that during a summit in the capital of Mali, Bamako.

It concerns the countries of Mali, Chad, Burkina Faso, Niger and Mauritania. The unit will count to 5000 soldiers. In northern Mali and neighboring areas, various terrorist movements are active, which have partly paved tribute to al Qaeda. They hide in the Sahara.