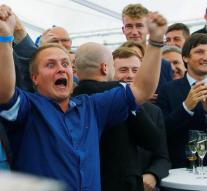 thus the AfD gets into the exit polls by broadcasters ARD and 21 percent more votes than the CDU of Chancellor Angela Merkel, which gets 19 percent of the vote. The turnout was higher than in the previous state elections when 51.5 percent of the electorate went to vote.