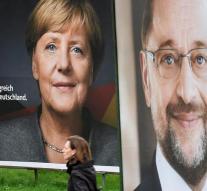 berlin - The German Social Democratic Party SPD wants in the opposition, after the worst result for her ever in elections for the Bundestag.

According to forecasts based on exit polls, the SPD achieved about 20 percent of the votes. The leadership of the party decided that the continuation of the Great Coalition with Christian Democrats of Chancellor Angela Merkel could not be discussed, so Vice-President Manuela Schwesig and Group Chairman Thomas Oppermann knew.

The party leadership believes that Martin Schulz can remain party chairman. His position is not questionable.