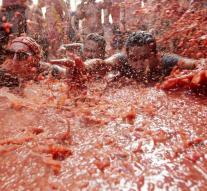 - 'Red' on Wednesday the color in the streets of the Spanish town of Buñol, just west of Valencia. Since people pelting each other, as every year, with kilos of tomatoes. That provides colorful pictures.

Spaniards on their stomachs by sliding the streets on a carpet of crushed tomatoes, enthusiastic tourists with hands full of red muck and especially very many people who are completely under the tomatoes.

Who quickly scroll through the photos, may think there is something terrible happened in Buñol, but nothing is less true. The inhabitants and excited visitors from all over the world celebrate La Tomatina, an annual festival where visitors pelting each other with tomatoes.


La Tomatina has its origins in a vulgar brawl that ended in a food fight. Meanwhile it is a party and thousands of tourists come every year to make.