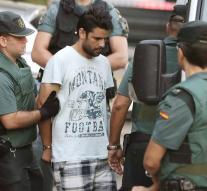 madrid - The four survivors of the terrorist group committing attacks in Barcelona and in Cambrils will be headed in Madrid on Tuesday. The newspaper La Vanguardia reports that the four-month evening from Barcelona was transferred to the capital.

Driss Oukabir, Mohammed Alla, Salh el Karib and Mohamed Houli Chemal have to appear for the Audiencia Nacional, a special court that deals with terrorist cases.

The four were part of a terrorist group consisting of twelve people. The other members of the cell have died. During the attacks in Catalonia last week, the group made fifteen deadly victims.