Home / World / Spanish swimmer does not swim because of 'Barcelona' 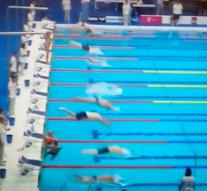 budapest - The Spanish swimmer Fernando Alvarez has been swimming for veterans in Budapest during the World Championships after the start shot. He had asked for a minute silence for the victims of the attack in Barcelona, ​​but the swimming pool refused.

Out of protest, 71-year-old Alvarez waited a minute before starting the 200-meter school stroke. He could forget the title, his time has not even been counted by the World Masters Championships organization.

'Does not matter,' said the Spaniard against local media. 'Even though I had won all the gold slices in the world; I feel better now. '