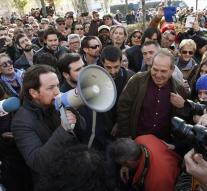 - Thousands of people have sat in twenty Spanish cities demonstrated against poverty. The occasion was the death last week of a single elderly woman, who had cut off the electricity because of late payment. She died in a fire at her home in the Catalan town of Reus. The woman had lit candles and had fallen asleep.

According to a study by the Spanish Foundation for Society and the Environment (ACA) die each year more than 7000 people due to lack of energy, as concluded by them electricity and gas. There are six times as many as the number of deaths in Spain in 2015 (1126).

'These are no deaths, but murder!' Chanted hundreds of protesters Saturday at the headquarters of Gas Natural Fenosa in Madrid, the energy that the power had shut the woman in Reus. 'It can not be that the fourth largest economy in the eurozone people die because companies that make fat profits and whose bosses received outrageous rewards for poor and elderly people cut the power,' said Pablo Iglesias, leader the left-wing protest party Podemos.